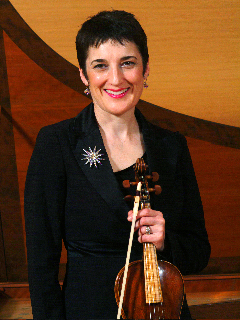 Kristin Van Cleve was recently appointed chairperson of the music department at the University of Dallas, where she has directed the chamber ensemble program since 2007.  She is Artistic Director and Principal Violinist of the historical performance ensemble Texas Camerata and is Principal Second Violin with the Dallas Opera Orchestra.  Ms. Van Cleve began violin studies in her hometown of Fairbanks, Alaska and later moved to Texas, receiving both Bachelor and Master of Music degrees in Violin Performance from the University of North Texas.   As a baroque violinist, she has performed in Boston, Washington, D.C., France, Mexico and throughout the southwest. Ms. Van Cleve is concertmaster of several other historical instrument ensembles, including the Orchestra of New Spain, and has performed with Apollo’s Fire, the Cleveland Baroque Orchestra.  As a modern violinist, she is a member of the New Hampshire Music Festival, has returned to Alaska as a faculty member of the Fairbanks Summer Arts Festival and in June 2011 traveled to Bolivia to teach and perform.  Ms. Van Cleve is active as a clinician for violin students of all ages and also maintains a private teaching studio in Dallas. She performs with the Fort Worth Symphony and traveled with that orchestra to Carnegie Hall in 2008.